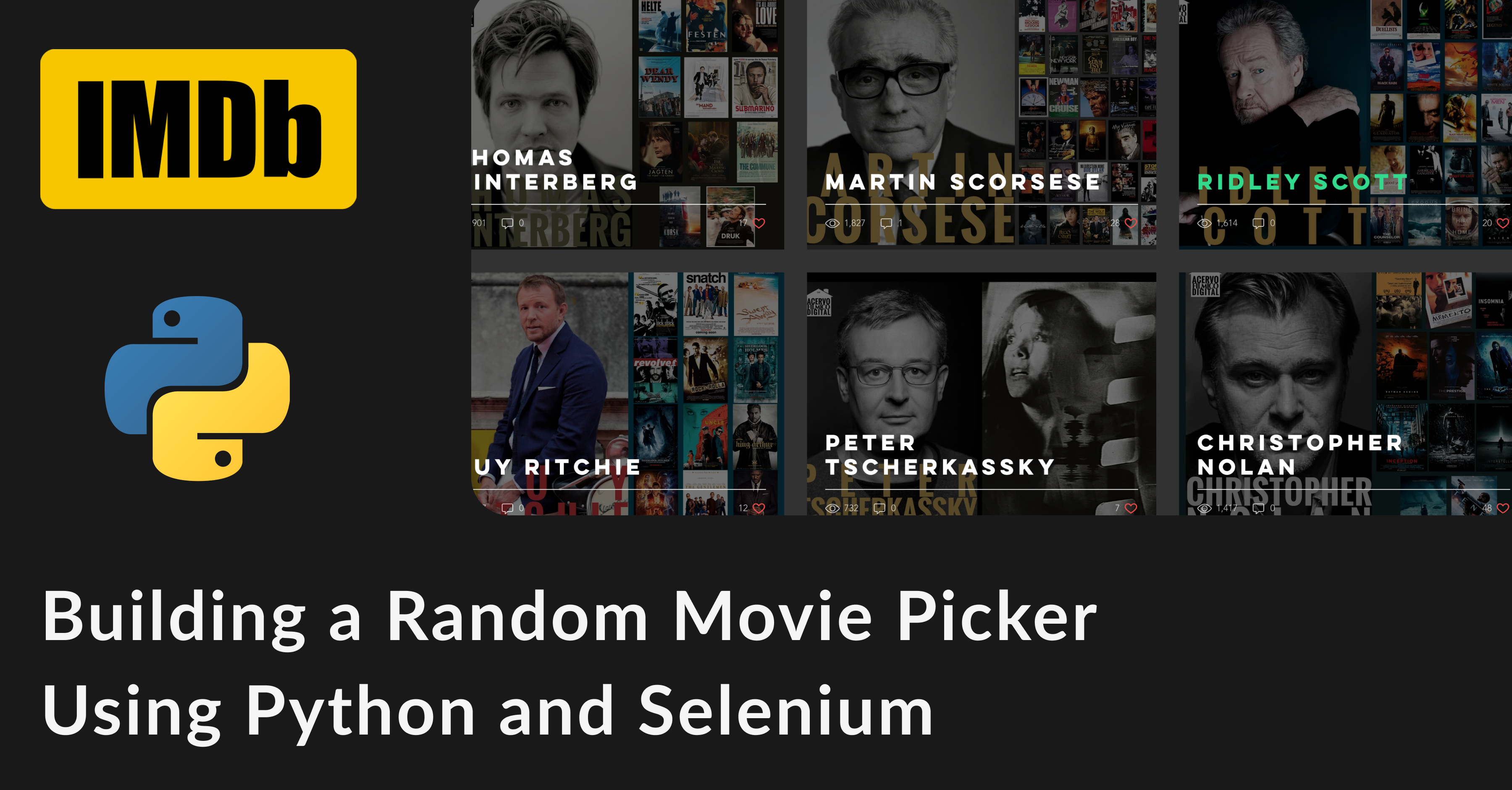 My wife (Dany) has been reviewing movies every week and posting them on her Youtube Channel (opens new window). She recently asked me if it was possible to scrape this list of directors (opens new window)and return a random movie they directed in order to help her decide on which movie to review next.

Sounds like a job for some good-ol-web-selenium (opens new window).

# How I Chose to Approach this Problem.

Scraping websites can be finicky. You're at the whim of the content creators markdown decisions.

The markup of Elacervo (opens new window) is tricky. Their director's page is consistent, but the individual director posts are not. Some director pages have their movie list individual p tags while some have their entire movie list formatted within a single span element. This is a problem.

Rather than trying to hack together a way to get most of the directors videos, I chose to get the list of directors and gather their movie lists from a reliable source.

I chose IMDB's which has a convenient python wrapper around their API IMDbPY (opens new window).

# Why did I pick Selenium as the Tool for this?

Dany is a beginner web developer and is curious about Python. Selenium provides the developer with visual confirmation with the automated browser interactions. Spawning a new browser instance and clicking through the site does impact performance, but I believe the benefits of the visual aspect of Selenium out-weighs the performance issues.

A framework such as Scrapy (opens new window) would provide the data quicker, but a big reason I'm building this is to help Dany learn Python.

# Setting up Selenium to Automate my Browser

Selenium takes a bit of setting up in order to start automating your browser.

You will also need to download the appropriate web driver. Selenium's documentation (opens new window) has links to the most popular browser drivers. For this tutorial, I will be using Google Chrome and Chromedriver (opens new window).

# Using Selenium and Python to Gather the Directors

Below is the code snippet I decided to use. I've appended numbers comments to describe important choices made within the snippet.

IMDbPY (opens new window) is a pretty neat package for querying IMDB's data. With only a few lines of Python, we can see the entire filmography of a directory.

# This Python Snippet Will Return Every Film for Each Director

We use Python's built in open (opens new window) function to open the directors.json file we created in the Selenium section. Then using Python's JSON decoder (opens new window), we can load data from the file into a usable JSON format.

Initializing an IMDb object gives us access to the packages functions, allowing us to query IMDb's database.

The method .search_person(person['name']) returns a list of people IMDb has within in their database. It appears the first result in the returned list is the most popular and reasoning behind the [0]. For this project, I'm making the assumption that is the director I want to work with.

# Differentiating Movie From Other Film Types

IMDbPY Movie objects properties can be seen documented here (opens new window). For this project, I'm just interested in movies, so I apply a conditional to check, appending the accepted films to a movies list.

It turns out that IMDbPY's Movie object only has the property year if the movie has been released, otherwise, it has the property status. I only want movies that are watchable now, and filter out the data accordingly.

# Writing the Movie Data to a Reusable JSON File

Like the data extracted using Selenium, I decided to reduce the number of API requests to IMDb by writing the acquired data into a reusable JSON file.

Rather than extracting all of the IMDb Movie object's data, I decided to simply take the movie's title and year values. In the future, it could be cool to extract additional data allowing for advanced filtering. For example, wanting to only watch a movie between the years 1970 and 1980 with a rating greater than 9.0. Although the IMDb Movie object said it has certain properties, it ended up being a bit finicky and I decided against it for now.

Now that we have a list of all of the movies from our group of directors in a json file, I can use Python's random.choice (opens new window) to randomly select a movie.

Seriously give it a shot. At the very least, randomly select a movie and watch its trailer. Many of these movies I had never heard of but they are fascinating, creative and artistic.

I hope this article was helpful!