Skip to content
Return to top
On this page

Of all of the no-code solutions I've tried Zapier has been the most powerful, intuitive tools to work with.

This article will show you how within a few clicks, you can create a "zap" or system of events that will automatically generate data-enriched messages that will be posted on Twitter whenever you upload a Youtube video.

Log in and you'll be met with the dashboard with this "Create your own workflow" section.

This step is simply connecting two applications together. In this example, I am using Youtube and Twitter. Zapier claims to have over 3000 applications you can integrate.

This is a simple example between two well known social media applications, but Zapier offers an amazing catalog of applications you can create automated workflows with.

I state a trigger when a new YouTube video is posted, and an action to create a tweet.

In the .gif you can see there is a decent number of triggers and actions, such as adding a video to a playlist or updating your twitter profile picture.

This is where we begin fine tuning the parameters of the trigger and action. 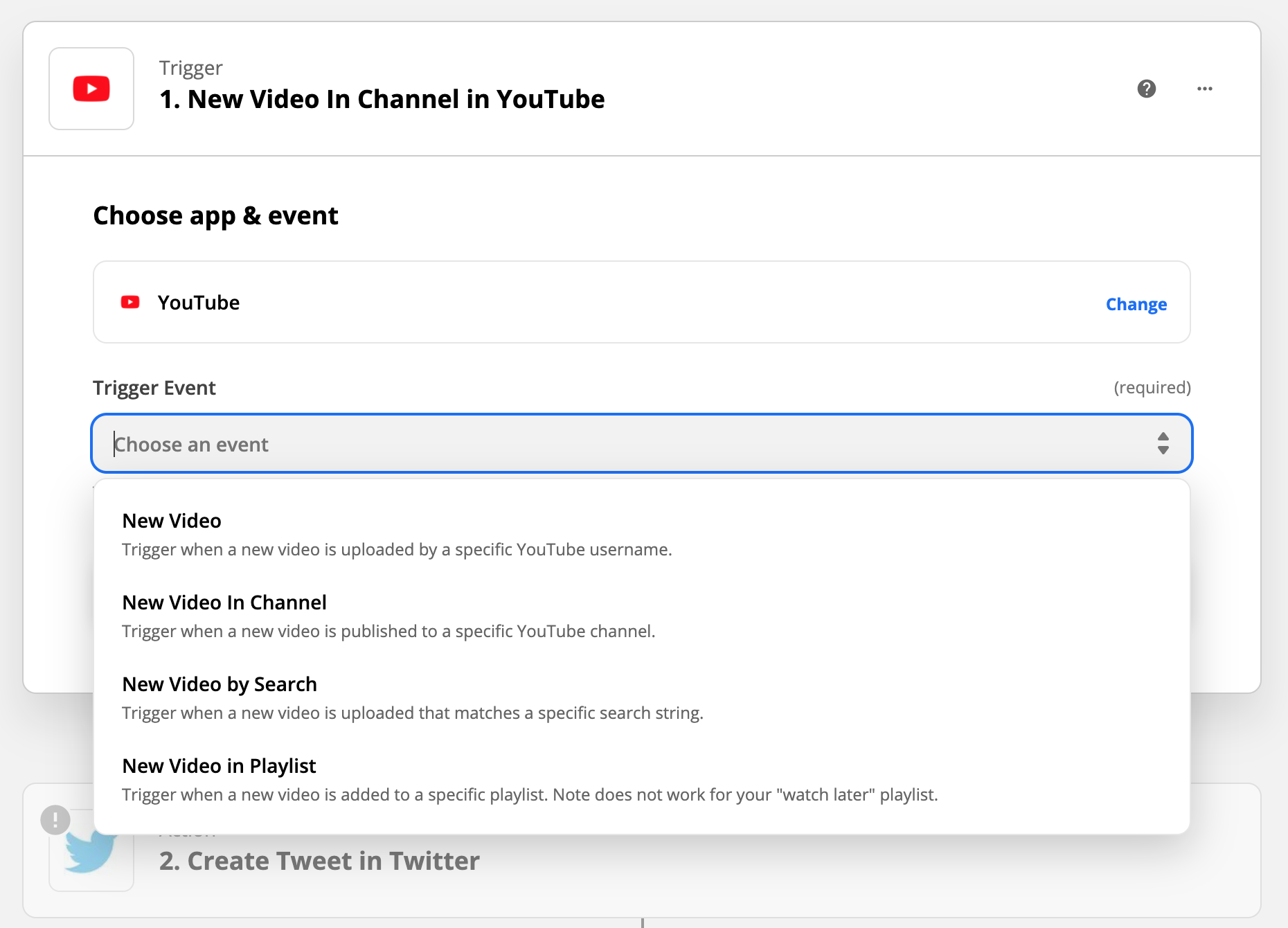 You will have to connect your Youtube account to Zapier using Oauth, then specify the trigger event. In this case, I will be selecting New Video In Channel. 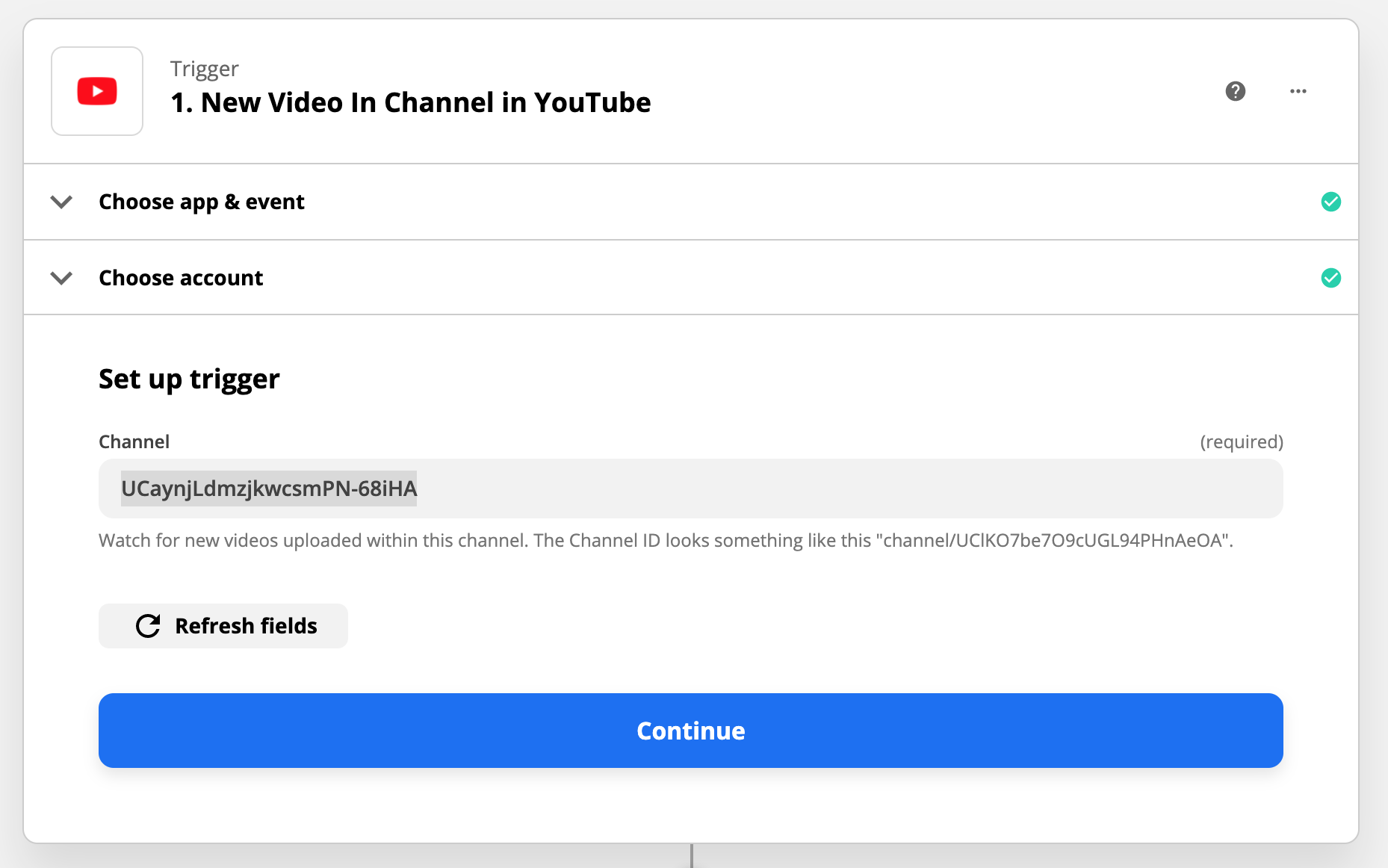 Here, you will input the Channel ID that you want to watch. To find your Youtube's Channel ID, follow these four steps:

You can test if the trigger is properly connected to your account. Please note: the test will only work if the Youtube account has already posted a video and the video is public.

Data returned from a successful trigger #

If everything is connected properly, you will see a success message and a scrollable window containing the trigger's data that will be available to your actions. 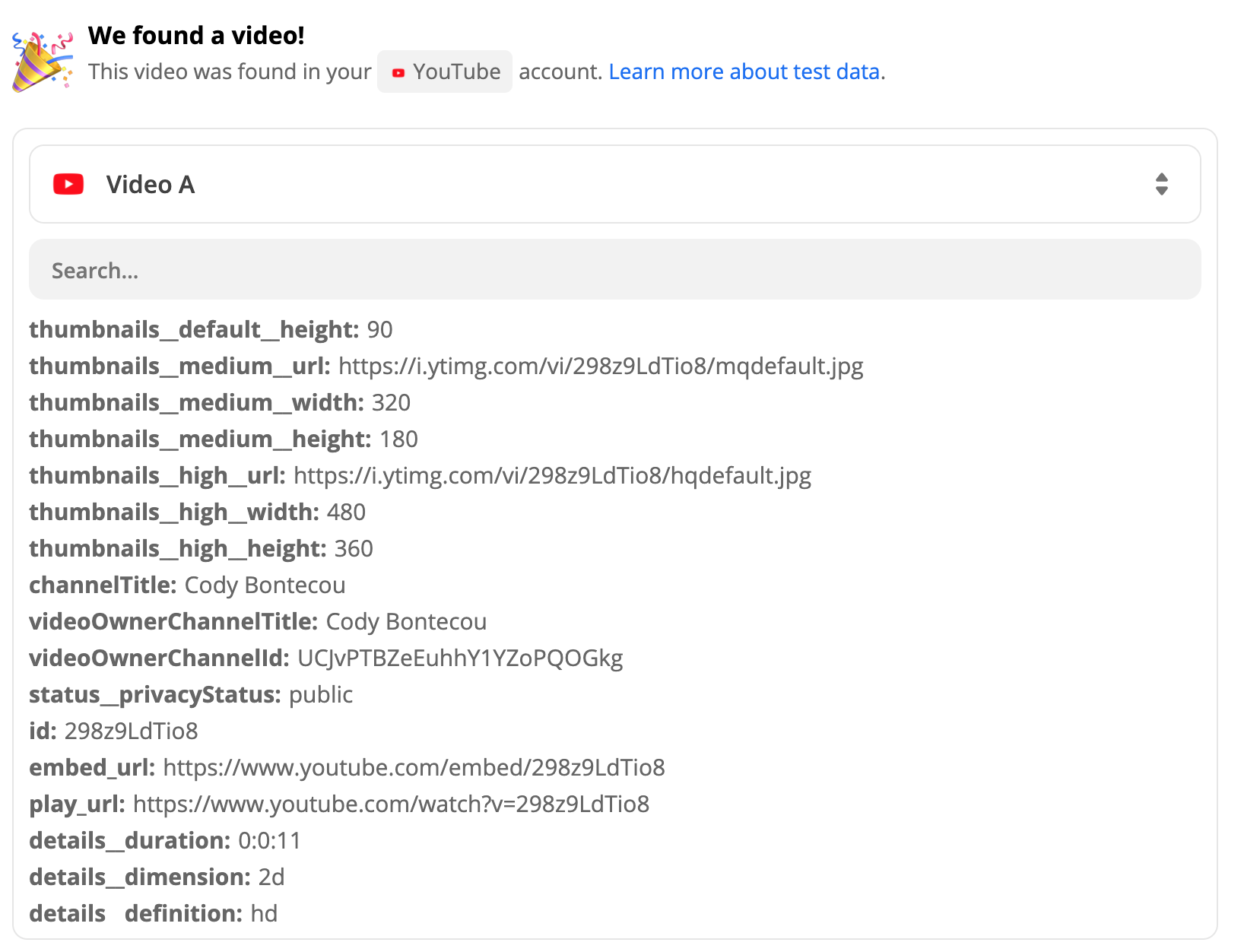 Because we are making a tweet to advertise the video, I imagine a few data points we are interested include the play_url, title, and description. This screenshot doesn't due the data justice, but I will show you how I use this data in the following Twitter action.

Fairly self-explanatory, but I'll include a screenshot just incase you need it. 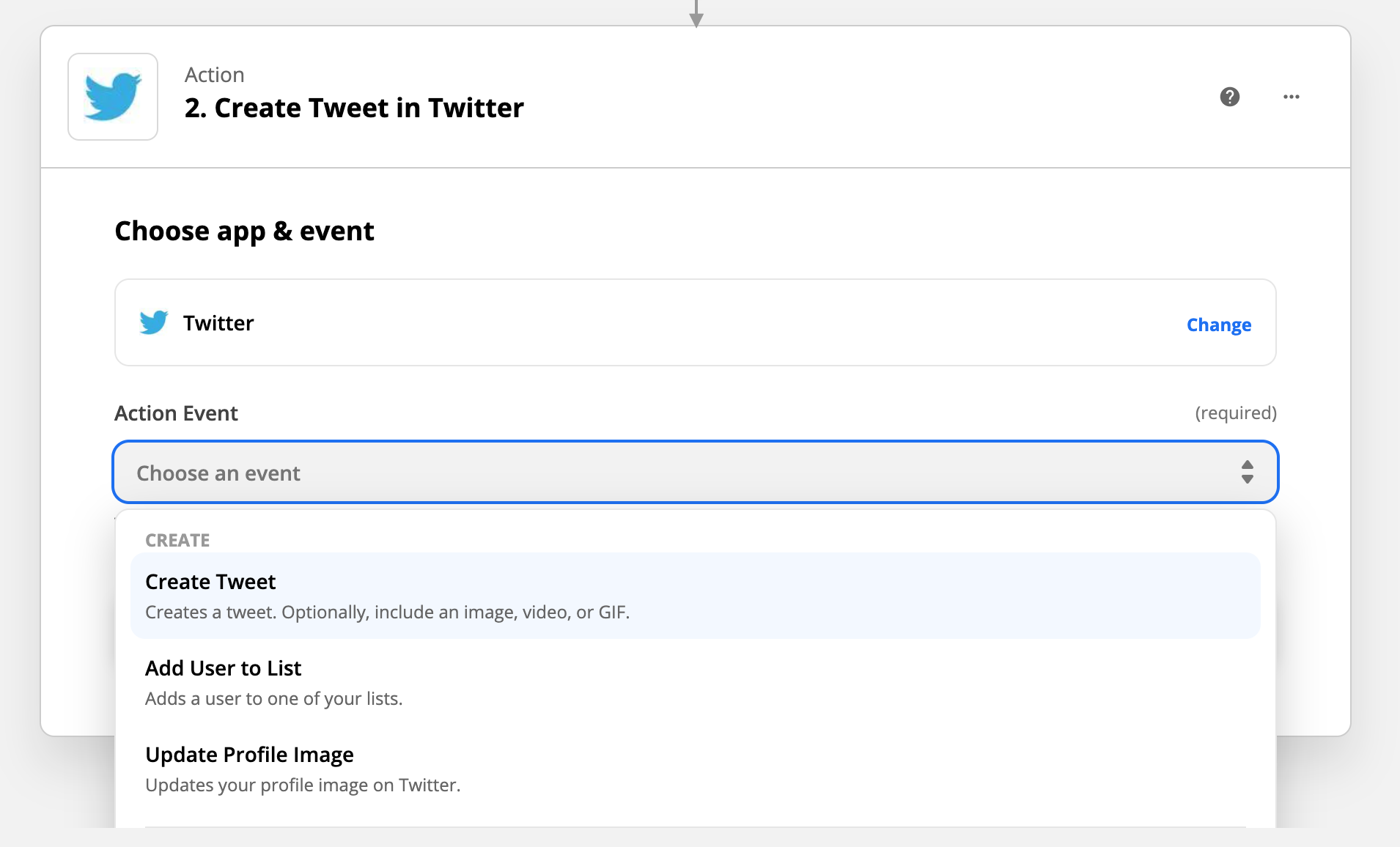 Setting up the action #

Setting up the action is where we can play with the data and generate our tweet. 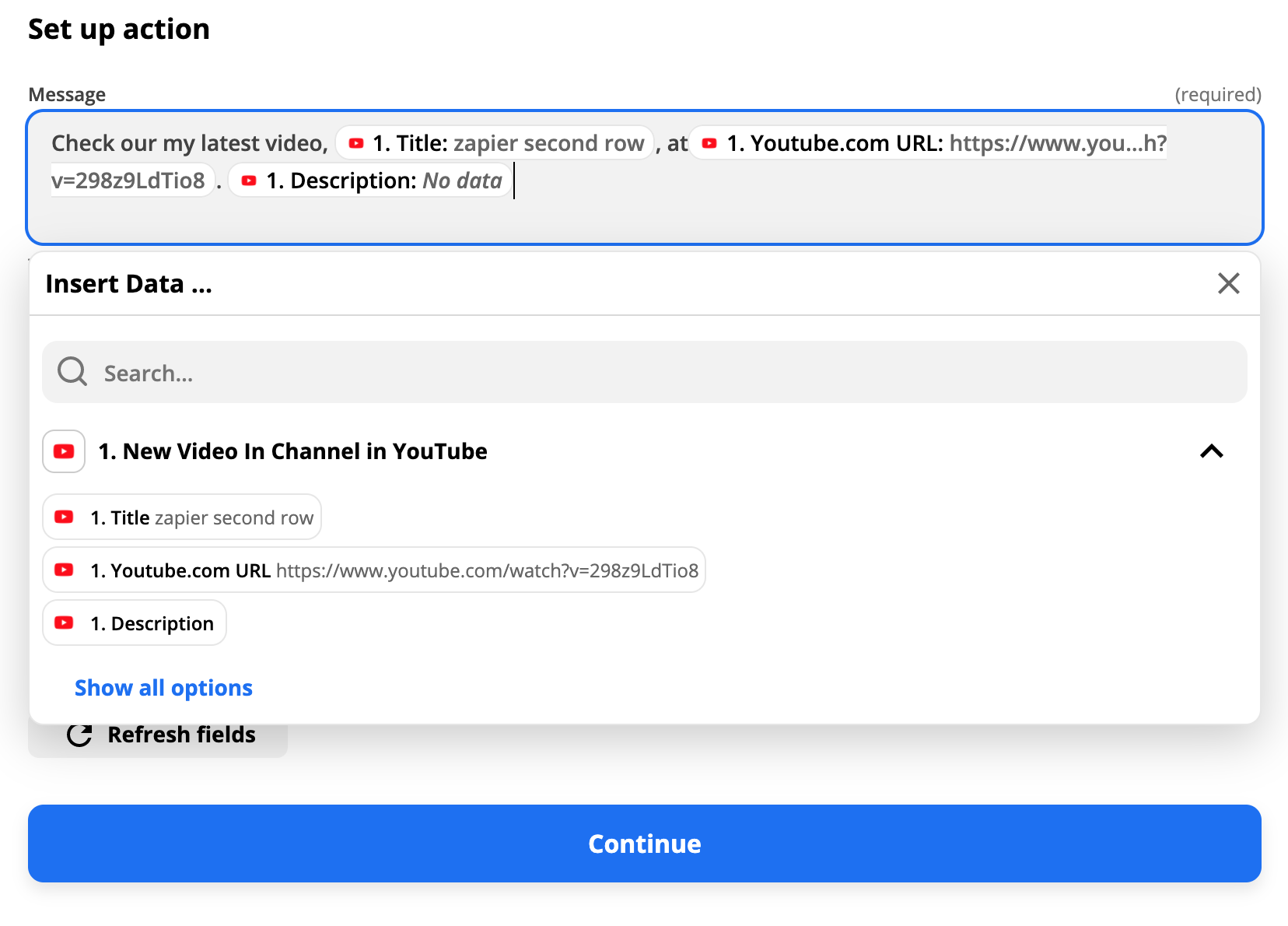 While setting up the action, you are able to generate a message for your tweet. There is an "Insert Data ..." option that allows you to insert data that was gathered when the Youtube trigger occurred. In the screenshot above, you can see some of the video data points such as title, url and description are available to be used within the tweet.

I decide not to shorten the URl because I imagine users are more familiar with Youtube URL's than they are with Zapier's shortened URL's.

Now you should see the ability to test your action. Testing this action will send the message to Twitter. You can see within the action's Message field the Twitter tweet that was generated and will be sent to Twitter if the action is executed with this particular video that we tested it with.

In our case, we are getting an undefined because the video we uploaded to test this didn't actually have a description when uploaded. Keep that in mind when using this automated workflow. 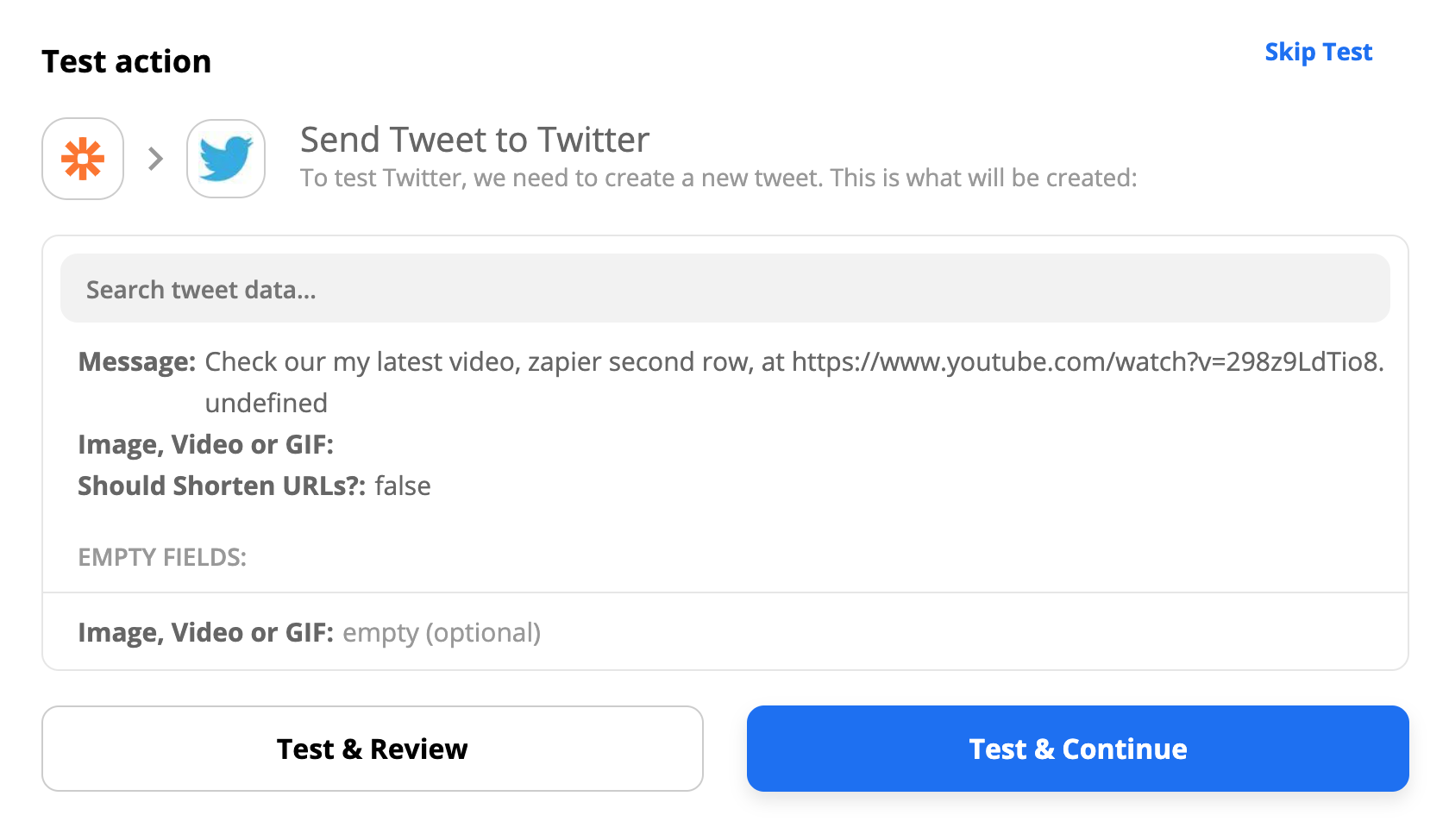 If all went well, you should now be able to automate Twitter tweets alongside your Youtube video uploads. I hope this article was helpful. Best of luck with your automation journey!